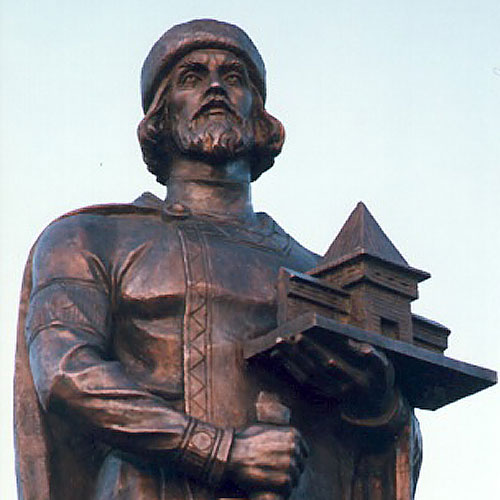 Yaroslavl was founded in 1010 by the Prince Yaroslav the Wise. The legend of the city’s foundation has it that at the confluence of the rivers Volga and Kotorosl there was a pagan village, called Bear’s Corner. Once the young Prince of Rostov Yaroslav the Wise sailed down the Volga. In Bear’s Corner he stopped and came ashore, because he had heard that the locals hit on merchants’ ships. The Prince ordered the pagans to stop the robbery and adopt Christianity. The locals were hostile towards the prince and set a ferocious she-bear on him. Yet the prince had no fear and killed the beast with a pole-axe. Yaroslav decided to found a city with a fortress. The city was named Yaroslavl after its founder.

To commemorate the events of the far past the coat of arms of the city depicts the bear with a silver axe. On the main square of Yaroslavl stands the monument to Yaroslav the Wise holding the reduced image of the fortress founded by him.

Yaroslavl is an ancient Russian fortress city on the Volga river. As the city was strategically and geographically in a favourable position, it became the strongpoint of princely power and outpost for the spread of Christianity in the Russian North East.

By the 12-13th centuries Yaroslavl had already become one of the most highly-developed cities in Rus, a large centre for trade and crafts. Metal working, pottery, civil engineering had reached a high level. Yaroslavl merchants carried on trade with other Russian lands, particularly with Novgorod and Pskov. Strong business links were established with Eastern and Western countries, particularly Scandinavia, as the city is mentioned in Scandinavian sagas. Yaroslavl became the centre of the transit trade; goods from the Northern Europe and the East were transported along the Volga-Caspian Route through the region. Eastern merchants frequently visited Yaroslavl lands.

Yaroslavl was not only a developed commercial and crafts centre, but also a centre of culture. The development of book-learning, spread of education and a high literacy rate in different layers of society, the development of local chronicle writing, formation of architectural and art traditions determined the economic and cultural blossom of the city on the Volga.

In the times of Tartar Mongol Yoke Yaroslavl was the place of the first in the North-East of Rus uprising against Tartar Mongol tribute collectors. Yaroslavl Princes pursued wise policy in relations with the Golden Horde, trying not to allow vindictive campaigns and keeping the city in safety and well-being. The Yaroslavl rulers were close associates of the Great Moscow Princes in their internal and external political struggle. Yaroslavl people were among the first to answer the call of the Moscow Prince Dmitry Donskoy and took part in the Battle of Kulikovo. The battle against the troops of Mamai Khan marked the beginning of liberation of Rus from the Tartar Mongol Yoke and the reunification of Russian lands. Merits of Yaroslavl dwellers to the Motherland, their heroic exploits in turning points of the history are the worthy example for younger generations.

In the 15th century, after the incorporation within the Moscow state, the city was given the honoured title of the sovereign’s native land. In the 17th century the Moscow tsars bequeathed Yaroslavl the nearby volosts (districts) to the direct heirs to the throne. The state treasury was moved here in the event of danger. Yaroslavl was among the first cities which were given oprichnina status by the tsar Ivan the Fourth (the Terrible), but the city managed to escape purges.

In the early 17th century Yaroslavl played a crucial role in the events of the Time of Troubles as it became the centre of the opposition to the foreign invaders. In 1612 Yaroslavl served as a temporary capital of Russia: the People’s Militia under the command of Kuzma Minin and Dmitry Pozharsky was stationed in the city. The highest bodies of state authority were established in Yaroslavl: the Council of all Russia was assembled, prikazes (central bodies of local and economic administration) were established, and the mint was built. The money minted in Yaroslavl went for the needs of the Militia and for the wages of service men. Being the capital of the Militia, Yaroslavl became the centre for propagation of the idea of the national solidarity within the Russian lands. Yaroslavl became the pillar of Russian statehood: the ideas of the national solidarity, legitimate governance, and defence of the state interests were embodied here. Here the Russian people felt their national unity.

The 18th century was a critical period in the history of the city. After Saint Petersburg had been built, Yaroslavl started the transition from a trade to an industrial economic model. Yaroslavl was one of the key centres of the emerging Russian industry. The reign of Peter the Great became an important landmark, which radically changed the social, political and economic basis of the ancient capital; a landmark, which determined the current status of the city as an industrial and cultural centre of Russia. In 1750 Feodor Volkov established in Yaroslavl the first provincial theatre in Russia. At the beginning of the 90-ies of the 18th century the most famous monument of the Old Russian literature, The Lay of Igor's Campaign, was found in Yaroslavl.

In the 19th century the city exterior received its final appearance. For the mix of different architectural styles and directions, which can be seen in Yaroslavl, the art historians call it the Florence of the Russian North.

In the modern and contemporary period of history the role of the city as a large industrial and cultural centre of Russia has risen. The 20th century gave new momentum to the development of industrial production in Yaroslavl.
It is has been the people who have always been behind all the remarkable achievements of Yaroslavl. The orientation towards leadership and success, energy and entrepreneurial spirit, curiosity and creativity of the Yaroslavl citizens became the basement for the dynamic development and prosperity of the city.

The world’s first artificial rubber tyre plant was built in Yaroslavl in 1932. Yaroslavl Automobile Factory created in 1916 constructed the first 5-ton dump-truck and in 1936 – the first trolleybus.

The first Russian cartoon to win an Oscar was The Old Man and the Sea, after the same-name novel by Ernest Hemingway, produced by Yaroslavl animator Aleksandr Petrov.

The Yaroslavl ice-hockey club Lokomotive is a multiple champion of Russia.