Yaroslavl has always been admired by travelers. In the second half of the 20th century, after it has been included in the famous Russian tourist route – The Golden Ring of Russia, Yaroslavl has received a powerful impetus in development of domestic and inbound tourism. The city became the largest center of cultural tourism. The richest museum collections arouse a lively interest among the travelers. One of the oldest museums of Russia is the Yaroslavl State Historical and Architectural Museum-Reserve, with its collection of more than 300 thousand historical and cultural monuments. Collections of the Yaroslavl Art Museum have the best in Russia collection of provincial portrait of the 18th century. The expositions with no counterparts in Russia and abroad are the most interesting: museum of the first woman-cosmonaut Valentina Tereshkova, picturesque country-estate Karabikha – the place of Nikolay Nekrasov’s creative inspiration. With support of the Member of the Academy of Sciences Dmitry Sergeyevich Likhachev, the unique exposition “The Lay of Igor’s Campaign” was created. It is an outstanding monument of the Old Russian culture dedicated to the poem of the 12th century, which greatly influenced the world art and culture. 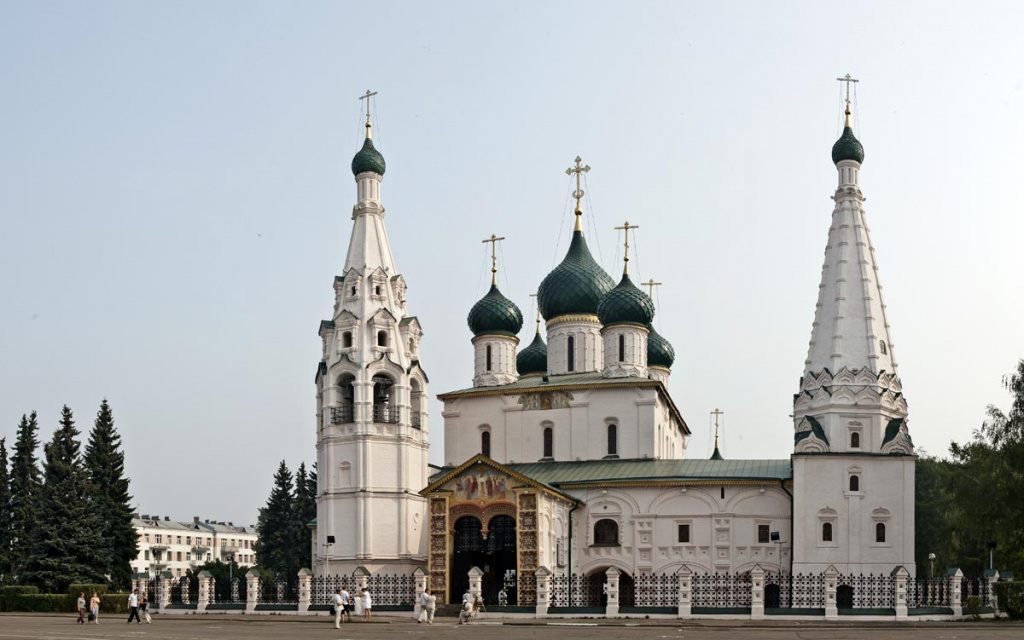 Year by year leisure in Yaroslavl becomes more and more diverse and comfortable. Guests of the city can participate in such large events as All-Russian Nekrasov’s Poetry Festival, Yaroslavl Maslenitsa (Shrovetide) and Yaroslavl City Day. Orthodox pilgrims come here to visit the Tolga and Kazan Mother of God Monasteries, other famous Yaroslavl churches. Fans of hiking come here to walk along the embankments, ancient streets and boulevards. Artistic people visit international festivals Jazz over the Volga (which is one of the ten leading annual music events of Russia) and the festival of modern dance Art of Dance. Yaroslavl has the Centre for Enamel Art “Emalis”, the unique museum of bells (bell casting craft being the special Yaroslavl manufacture), where every visitor can ring any bell and listen to the best Russian bell-ringers at the International Festival Preobrazhenie.

The city is a jewel of the world cultural heritage. Yaroslavl is a harmonic, uniquely preserved architectural ensemble of the millennium; it takes a prominent part among the best sites of the world architecture.

All architectural styles are echoed in Yaroslavl making it look like encyclopedia of architecture. Its first stone residential houses are the most precious monuments of Russian civil architecture. The central part of Yaroslavl, constructed according to the regular design of 1778, is a specimen of architectural art of the classicism era. Buildings of the modern era are the real architectural jewels of the urban landscape. Radial-ring development of the city survived to the present days and has become the true highlight of the Yaroslavl urban architecture.

The unique town-planning structure of the historical center of Yaroslavl, created according to the plan approved by Catherine the Great and harmonically combining regular town planning of the classicism era with abundance of ancient religious buildings, has been recognized by the world cultural community. Yaroslavl is the third city after Saint-Petersburg and Novgorod the Great that was included in the UNESCO World Heritage List not only with its separate architectural monuments, but as a historical center of the city.

City’s jubilee celebrated in 2010 became the powerful impetus for further development of domestic and inbound tourism. Dynamically developing leisure and cultural facilities of the city (Yaroslavl Zoo, Yaroslavl Children Railway, the Volga Embankment, the redeveloped Strelka – a promenade area at the place of confluence of Volga and Kotorosl, etc.) and its natural and historical diversity makes it possible to develop almost all kinds of tourism, including the most popular: recreational, cultural and educational, business, sports, scientific, ecological tourism.

Reconstruction of existing hotels, construction of new comfortable hotel complexes with cozy cafes, restaurants and recreational facilities, meeting the most demanding requirements of the travelers, make the city attractive for tourists from all over the world, help its further integration into the European cultural environment.

In 2021 the city had 73 residential facilities for tourists with 2,8 thousand rooms (more than 5,5 thousand beds). Among them 27 hotels, 19 mini-hotels, 7 guest houses, 15 hostels and 5 boarding houses. According to regular monitoring, the tourist flow to the city Yaroslavl in 2021 increased by 8% in comparison with 2020 and made up 1 918,8 thousand tourists and visitors.

Number of Tourists in Yaroslavl

Yaroslavl offers all kinds of tourism: cultural tourism, event tourism, business and family tourism. Due to restrictions in pandemic times online tourism programs are offered.
In 2021 the main events were: New Year and Christmas fairs, Festival “Yaroslavl Shrovetide” (Maslenitsa), Yaroslavl City Day. The new project “The Museum Embankment” started on Yaroslavl City Day.
In September 2021 the new exhibition “Alley of Private Museums” opened in Pervomaysky Boulevard. The project was carried out by private museums of the city, Yaroslavl City Hall and Municipal Public Institution “Agency for Advertising, Out-of-Home Media and City Decoration”.
More than 100 tourist routes and interactive programs are available for guests of the city.
In 2021 Yaroslavl was included to the Top-10 Cities of Russia National Project. The project chooses the most significant, well-known and symbolic Russian cities.

Tourism infrastructure in Yaroslavl includes:
-  more than 20 industry-sponsored (belonging to different organizations) museums, 17 private museums, more than 70 museums in the educational institutions of the city;
-  785 historical and cultural monuments are situated in the city;
-  32 tourist travel companies and 128 travel agencies work in the city.

The main tourist symbols of Yaroslavl are

Yaroslavl, a motherland of prominent people

Names of many famous people are connected with Yaroslavl. Among them are Feodor Volkov, the founder of the first Russian theatre, distinguished poets Nikolay Nekrasov and Leonid Trefolev, the famous Russian opera singer (light tenor) Leonid Sobinov, the founder of the Russian pedagogical science Konstantin Ushinsky, the first woman-cosmonaut Valentina Tereshkova.

Majolica is a kind of ceramics, made of burned clay painted with glazes. Ornamental boards, window casing moldings, ceramic tiles, and also housewares and even monumental sculptural images are made in majolica technique.

Majolica studio of Pavlov and Shepelev offers excursions to Yaroslavl Majolica – the only company in Russia specializing in production of artistic articles from ceramics, in traditional Russian handicraft style, known as majolica. Today Yaroslavl is the only existing center of this folk art; it is well-known all over the world.

Yaroslavl, a motherland of Russian merchants

The boom of economic development of the city was connected with opening of trading routes to Europe via the freshly build port Archangelsk (1584). After the annexation of Kazan and Astrakhan khanates to Russia (1552, 1556) the Volga Trade Route flourished. Agents of the London Moscow Company chose Yaroslavl as the main warehouse base for their expeditions to the East. As agreed with the local authorities, the merchants handled their business through Yaroslavl, not even coming to Moscow. The other factor that promoted development of Yaroslavl was that Ivan the Terrible, after having devastated Novgorod the Great (1569), moved many merchants’ families to other places, including to Yaroslavl. Almost all Yaroslavl trading people, who later glorified their new motherland, originated from Novgorod.

The Time of Troubles of the 17th century made a mess of the trade; so local merchants set off on the road to support the national authorities in Moscow. In 1612 for half a year Yaroslavl had become a military base for Militia of Minin and Pozharsky. In 1613 the winner Mikhail Romanov granted letters of privilege to Yaroslavl merchants, who contributed large sums for Militia. This fact let Yaroslavl merchants become part of Big League of the Russian trade – it seems that nowhere in the country there have been more merchants belonging to the “top guild” (according to the later terminology) than in Yaroslavl.

By 1630 Yaroslavl had 29 permanent missions only of the European merchant ventures. To meet the growing demands of the trading industry Yaroslavl built the ship-yard, which constructed vessels that could be used on the Volga river and on the Caspian Sea. All these prompted fast growth of the city life – the trading quarter grew, numerous settlements surrounded the city. Abundant construction of churches transformed the city in mere dozens of years, reflecting excessiveness of merchants’ funds.

After Saint-Petersburg had been built, Archangelsk lost its commercial importance; and therefore the resources that provided prosperity to Yaroslavl in the 17th century has exhausted. But this fact only gave an impetus to Yaroslavl merchants (who by that time had extraordinary finances) to invest in industry. By 1770 around 180 factories worked in Yaroslavl and suburbs, while a century ago there were no factories at all. Most of the Yaroslavl merchants and manufacturers are today remembered as well-known charity-givers and patrons of arts. Among them are brothers Stepan, Pavel and Ivan Matveevsky, merchant and entrepreneur, the city mayor Ivan Aleksandrovich Vakhromeev, merchant and patron of arts Nikolay Mikhaylovich Gradusov.

Yaroslavl, a motherland of the first Russian theatre

In 1750 in Yaroslavl, Feodor Volkov, the son of the merchant, established the public theatre. He became the first in Russia theatre establisher and owner, having invested his own funds in theatrical business.

The museum of the theatre was created in 1930-ies. Its first display items were connected with creation of performances: pictures, models, sketches, programs and posters, negative images. The museum’s earliest exhibits – theatre bills and programs – date back to the middle of the 19th century up to 1907; some materials are connected with celebration of the 150-years anniversary of the theatre in 1900. The modern collection of the museum has around 15 thousand exhibits. The largest collection is the collection of theatre bills and programs of the Volkov Theatre, and also of the guest troupes, which performed on the Yaroslavl stage from 1847 till present time. In 1930-ies the fund of photographs and negative images began to form. The oldest pictures date back to 1890-ies. The collection of glass negatives of the 1930-1950-ies is especially valuable. From the end of 1990-ies the museum began to form the video library of performances, in the year 2000 the new department of exhibits appeared – materials concerning the International Volkov Theatre Festival, which takes place in Yaroslavl every autumn.